Once upon a time I was married…..now I’m not! I have 3 daughters of whom I am very proud (exactly as it should be).  Katherine is 25, Elsie is 22 and Freya is 20. Upon finishing school, and much to my dismay, I was told I had to go to University!!!  I thought all my studies were over!  I attended U.N.E in Armidale and completed an Arts Degree – doing almost any subject that didn’t fall under the ‘Arts’ category – such as all the Human Bio-science, Genetics and Geography modules available.  I also threw in Maths and Biology.  I certainly didn’t want to teach so there was no need to extend my education with a Diploma in Teaching – I would surely be in jail by now if that had been the case as some of the behaviour in school these days would not have been well received by me.

Potential victims should all be thankful.

At uni I played soccer, tennis and water polo amongst other things.  I had a few boyfriends and attended a number of parties.  Some I remember fondly, others I would rather forget – and then there are other people/opportunities I should have taken more interest in.  Once ‘degreed’ I travelled overseas with Shirley and Julia Stahmann – both girls had also completed their studies.  We had 3 months touring Europe and the UK – like a whirlwind – and came home very sick of each other’s company.

Is that why you and Julia moved to America Shirley?  Just to get away from me?

Fortunately the Stahmann and Custance families have remained the best of friends and we see each other every year!  My life would be far less colourful if ‘Shirley experiences’ were not included.  Post Europe I worked for a while, travelled to South America on and Expedition called Operation Raleigh, had a few more boyfriends and then….. went back to uni again!

Can you believe it?

This time voluntarily, to do a Business Degree, (I hated Economics at school)!  In this degree I completed all the Accounting, Tax, Economics and Law modules available.  My plan was to go into Stock Broking…..what really happened was I married instead – in my second year of study!  I was now 25 – nearly 26.  After marrying (Jeff Dodd) we lived in Brisbane and I worked at Flight Centre in the Head Office under Jim Goldburg and Skroo Turner.  I continued my studies externally and eventually completed the degree the day Elsie was due to be born.

We had purchased a little house in Gordon Park (when Interest rates were at 18%) and completed a small renovation before moving to Moree (NSW) where Jeff had been offered the role of Manager for Stahmann Farms.  For those of you who aren’t familiar with this operation – it is the largest Pecan farm in the southern hemisphere and when we were there it was home to 68,500 healthy producing Pecan trees.  What a wonderful place to live and have babies.  (Though I didn’t literally have babies there).  In fact I did all I could to get as far away from Moree or Warialda as I could if a child was due – that is another story.

Katherine was 7 months old when we moved there and was soon joined by Elsie and Freya.  Farm life was good and we made many friends in Moree.  As is the way there were many funny stories from those days too.  When Freya was 18 months old in 1996 we moved to Peregian Beach (Jeff wanted to branch into the marketing side of nuts).  As the girls grew older they joined the local surf club and had many successes at various surf lifesaving comps – their preferred discipline was ‘Boards’ and it was so much fun being part of those years.

Now they have all left home – I should have had more children – perhaps 6?

Katherine is now completing a degree in Applied Science – Equine Studies and is heading to Kentucky to do a 3 month internship in horse massage and acupuncture, then coming back here to do a Vet degree specialising in horses!  Elsie completed a degree in Agricultural Science last year and is now working for Top Country out at Roma.  Elsie and Katherine play Polo Cross and love it.  Needless to say the Autumn/Winter weekends are now spent travelling the countryside to various Polo Cross events.  Freya has joined the Navy.  She tried uni and only passed the course on ‘How to Party Hard’, though not to be too harsh, as she did this flying colours.  It would seem the Navy suits Freya.  So far she has taken out Recruit of the Intake (from 100 recruits at Cerberus in Vic) and Dux of the CSO (Combat Systems Operator) course at Watson’s Bay.  Beware everyone – our nation’s security is in her hands!!

The university is pleased she has found her focuses elsewhere.

Jeff and I separated about 8 years ago but still get on very well which is good for us and the children.

I bought a Snap printing franchise in Rocklea just over 4 years ago so now spend at least 4 days a week in Brisbane.  I still live at Peregian and enjoy most weekends in the surf and sun.  It is a beautiful part of the world.

For those of you who know my sister Jane – she commutes to Brisbane every week from Monto or Taroom and is the CFO for Frontline – based at Enoggera Army Barracks.  Jane and Nigel have a Jack Russell called Albi and love him very much.

My parents live at Buderim now, both well and are busier than ever.

Of my brothers: David lives in Maitland, William in Brisbane and Matthew in London.  Matthew is the lead singer (in his spare time), of a little band they put together called June’s Bunker!!

What have you all been up too?

Let’s use this Blog to find out what we have all been doing, where we are heading and what each others passions may be.  Let’s support each other on our various ventures?  Too much information is never enough.  We have all been on our own journeys, many with careers and families; many of us have had children and even grandchildren (please not great-grandchildren yet?).  Some of us have already reconnected and it is fun!  The old friends I have met recently have not changed.  We are all still, so simply, ourselves.  Let’s find us all again and have a big party and lots of little ones too – for many years to come. 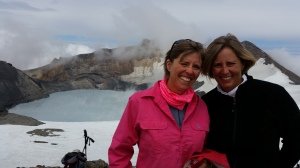 Jane and me in NZ this year (2015). We tramped the Tongariro Crossing.

Once I get the hang of this I will post news of myself!